Census Bureau Publishes Poverty Rates From Two Measures. In recent years, the U.S. Census Bureau has published poverty rates using two methodologies that approach poverty measurement differently, as described below. Both measures determine whether a household is poor by comparing the household’s resources against a standard of need, known as a poverty threshold. Poverty rates are calculated by dividing the number of individuals counted as poor by the total population.

SPM Poverty Rate Much Higher in California Than in Rest of U.S. Today, the Census Bureau released poverty rates based on data from 2014 through 2016. Over this period, California’s OPM poverty rate was similar to the rest of the country. However, consistent with previous releases of Census Bureau data, California’s SPM poverty rate—at 20.4 percent—was much higher than in the rest of the U.S. This difference can primarily be attributed to the state’s higher housing costs. This rate is equivalent to about 8 million Californians being considered poor. 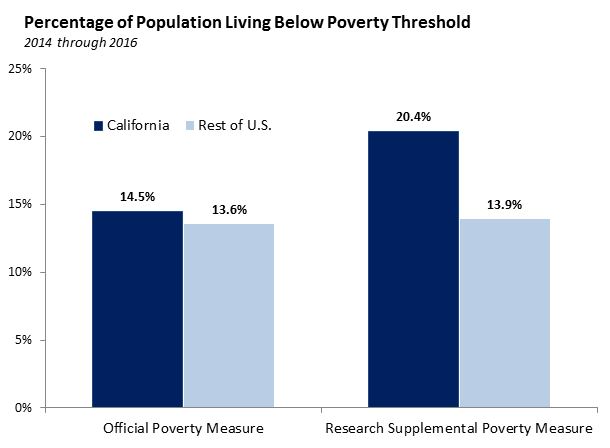