California's Employment Development Department (EDD) has released preliminary state jobs data for September 2015. (Jobs data is reported by sector; we summarize what those sectors are here.)

Modest September Job Gains. Over the last 12 months, California has gained 444,300 jobs (up 2.8%, seasonally adjusted), which averages to about a 37,000 net job gain monthly over the past year. September was much weaker than that, with a seasonally-adjusted gain of only 8,200 in the preliminary EDD data. As shown below, the state's powerhouse professional and technical services sector (which includes many technology sector jobs) reported a small loss in September, offsetting part of the last year's healthy gains. The state's financial services sector shrunk slightly in September too. Manufacturing jobs were essentially flat in September. Jobs in the information sector grew (non-seasonally-adjusted data show a 5.3% gain in motion picture and video production jobs for the month). Local government jobs grew strongly, with significant growth in school employment at the beginning of the new school year. 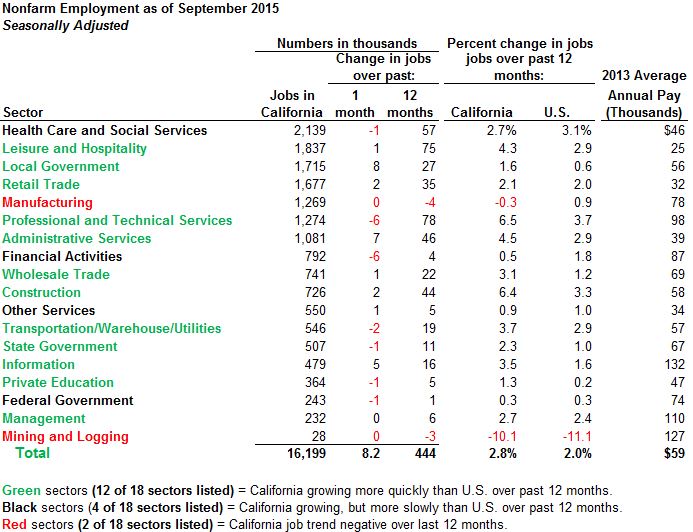 Items to Watch... It is important not to pay too much attention to any single month of employment data. Over the past year, California has had healthy employment growth, led by growth in the technology sector and construction. The Bay Area, with its large concentration of technology companies, has been California's job leader over the past year. The softness in the professional and technical service sector in September (including a 1% decline in computer services jobs in the San Jose area) may or may not prove to be the start of a trend. Because California's economy and budget are so tied right now to the strength of the technology sector, this data should be monitored over the coming months.