The official unemployment rate has been improving in California and the rest of the nation. In addition to this commonly reported measure of unemployment, there are also other measures of "labor underutilization" in the economy, such as the "U-6" measure.

The U-6 Measure. The U.S. Bureau of Labor Statistics (BLS) recently updated its "alternative measures of labor underutilization" for states to include all four quarters of 2014. One such alternative measure is the U-6  rate, which considers not only the unemployed population in the official "U-3" unemployment rate, but also marginally attached workers and those employed part-time for economic reasons. The U-6 measure has been said to measure the "unemployed, underemployed, and those who are not looking but who want a job."

Below, we provide more background on U-6 and other unemployment measures and then discuss the new data as it pertains to California.

Background. When the media, economists, and public officials discuss the "unemployment rate," they typically are referring to BLS's official unemployment rate measure known as U-3. U-3 attempts to measure all jobless persons who are available to take a job and have actively sought work in the past four weeks. As BLS notes, U-3 is a data source that "has been thoroughly reviewed and validated since the inception of the Current Population Survey (CPS) in 1940." The CPS is a monthly survey of households conducted by the Census Bureau for  BLS.

2014 Labor Underutilization Data. BLS provides alternative measures like U-6 on a four-quarter moving-average basis for states to increase the reliability of CPS estimates (which are based on small sample sizes at the state level) and to reduce the effects of seasonality on the measure. According to the newly updated 2014 data (considering all four quarters of 2014), the current four-quarter moving-average U-6 rate is 15.2% for California and 12.0% for the U.S. as a whole. By its nature, the U-6 rate is higher than the official U-3 unemployment rate. For the last four quarters, on average, the official U-3 rate is reported to have been 7.5% for California and 6.2% for the U.S. as a whole. (BLS notes that survey differences may cause this four-quarter U-3 measure to differ from the commonly reported state unemployment rates over the same period.)

U-6 has improved markedly for both California and the U.S. since its peak in 2010, as shown below. Still, especially for California, U-6 remains significantly above where it was in 2006 prior to the economic downturn. (California's U-6 rate was 9.1% then.) 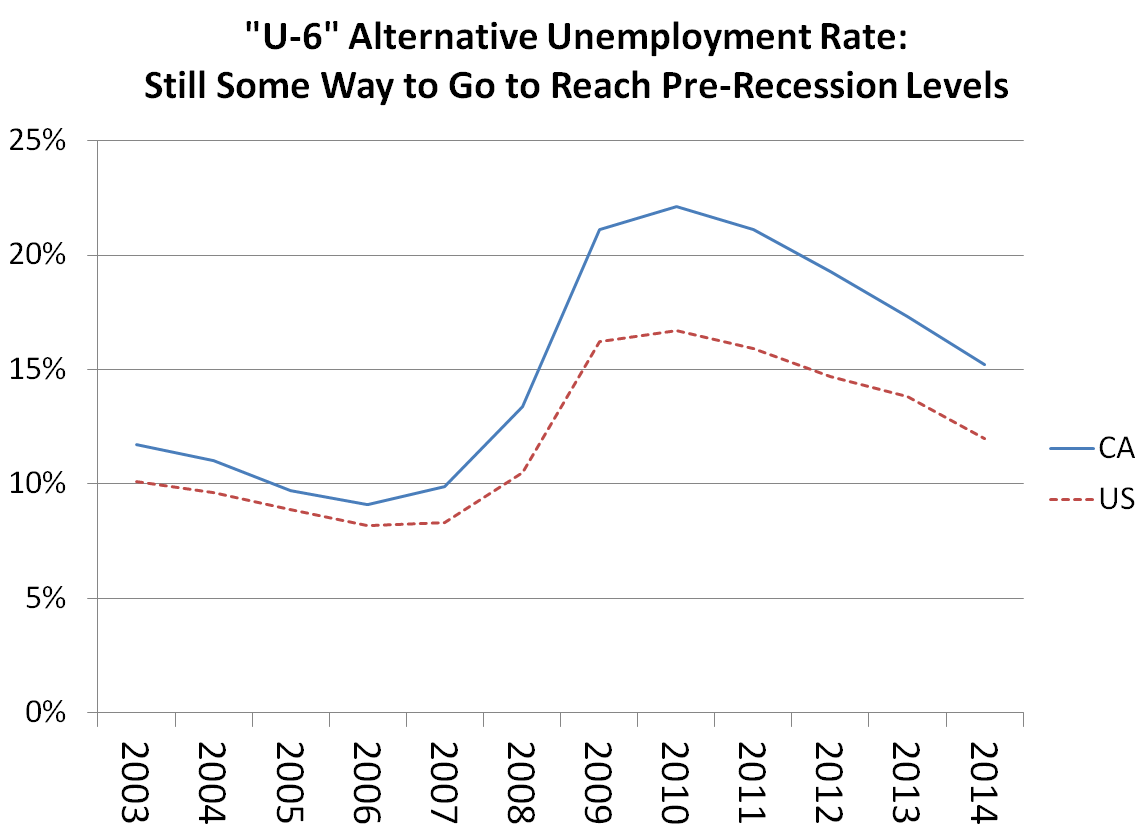 California Has Second-Highest U-6 Rate. Among U.S. states, California has the second-highest official unemployment rate (7.0%) as of December 2014, trailing Mississippi (7.2%) and also the District of Columbia (7.3%). (As we discussed recently on the blog, California has a relatively higher official unemployment rate, compared to the rest of the country, due largely to higher unemployment rates in Los Angeles County and the Inland Empire, as well as to higher unemployment in agricultural counties.) California also has the second-highest U-6 rate (15.2%) at the end of 2014, but by this measure it trails only Nevada (15.3%). Ranking third and fourth are Arizona (14.7%) and Oregon (14.2%).

More Information on California Labor Underutilization. California's job market has been improving. California's Employment Development Department (EDD) reports that just under 1.2 million Californians worked part-time "for economic reasons" as of 2014. As shown in the EDD figure below, the number of Californians in this category dropped by 124,000 (9.5%) during the past year. 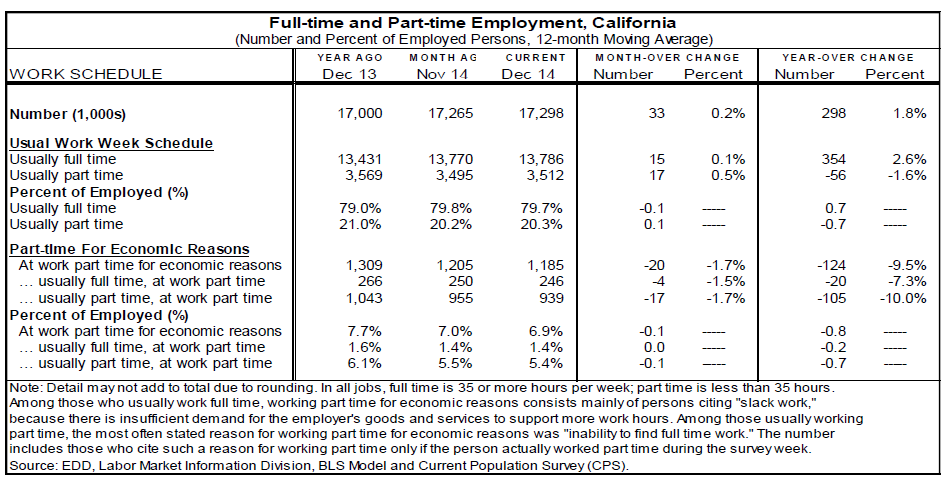 Many Americans are "not in the labor force" (sometimes abbreviated as NILF) according to official labor survey definitions. For example, retired people, students, and persons taking care of children or other family members often are classified as not in the labor force. The aging of the population contributes somewhat to a rise in this population.