The recent stock market downturn has also roiled currency markets. For some time now--well over a year--the U.S. dollar has been steadily appreciating against many of the world's currencies, including most of California's largest trading partners. Trends in U.S. dollar exchange rates with currencies of major trading partners Europe, China, Mexico, and Japan are shown below. As the lines go up in the figure below, the dollar appreciates (becomes stronger) relative to the other currencies. 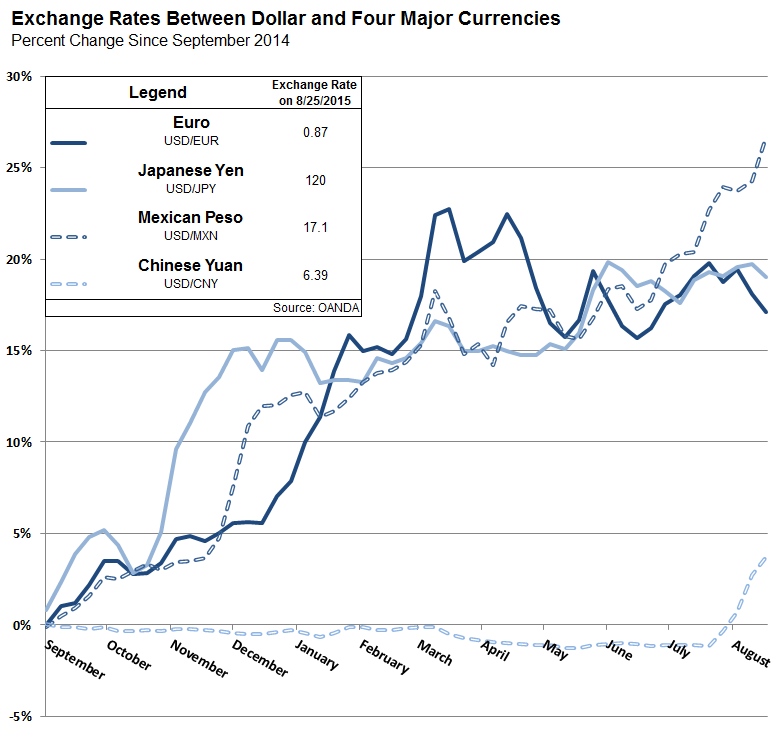 Stronger Dollar Produces Both Positive and Negative Effects Here. As we have noted previously, a stronger dollar has both positive and negative effects for the California economy. The situation with the Chinese currency is an interesting case study in this regard. During most of the period displayed above, the exchange rate between the U.S. dollar and the yuan of China--a significant California trading partner--has stayed relatively constant. Largely because of Chinese government intervention, however, the yuan has depreciated against the dollar by more than 5% since July 30. At the same time, the Japanese yen and the Euro have also begun to strengthen relative to the U.S. dollar. There are many factors behind these recent movements in currency exchange rates, including government policy changes as well as market perspectives regarding the relative health of economies around the world.

The yuan's depreciation could make it more expensive for Chinese consumers to buy American-made and California-made products. While the depreciation of the yuan has caused some concern in this regard, it is also worth noting that California imports far more from China than we export. The depreciation likely will reinforce this trade imbalance with China. California consumers may benefit from this as the strong dollar could lower the cost of imports.

Other Effects of China's Economic Turmoil. China's economic turmoil is a cause of concern for the economies of the U.S., California, and the rest of the world. It has been a factor in recent stock market declines, for instance. That being said, the depreciation of the yuan and other Chinese economic events also produce some positive effects here, as discussed above. The weakness in China also has contributed to lower oil prices worldwide, which, overall, should help California consumers in the short run, despite the fact that lower oil prices have negative localized effects, especially in oil-producing Kern County.