In our Overview of the Governor's Budget, we discuss the potential effects of falling oil prices on the economy. Falling oil prices contribute to our current opinion that U.S. real GDP likely will grow slightly more than reflected in the administration's budget plan projections in 2014 and 2015. 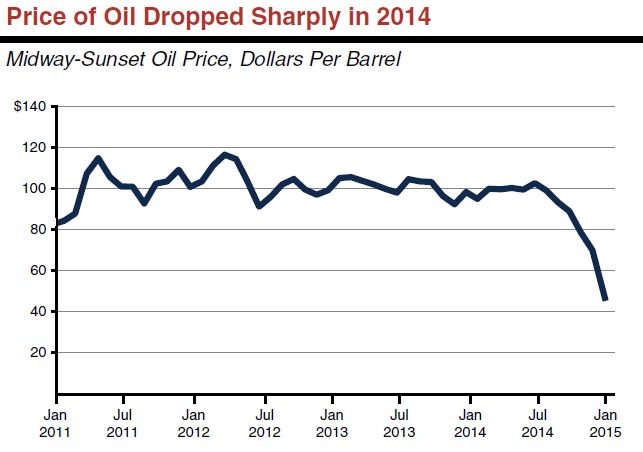 Low Oil Prices Help Economy in Near Term. In recent months, the price of oil traded on the world market has dropped sharply, from over $100 per barrel to about $50 per barrel. Above, the figure shows how prices from California's main oil field have dropped similarly. Oil accounts for more than one third of all U.S. energy use, mostly as vehicle fuel. Some recent studies estimate that this should cause overall U.S. economic output to rise by 0.5 percent to 1 percent on a one-time basis, accounting for both the gains to oil users and the losses to oil producers.

The effect of a price decline on California would most likely be in the same range, and according to one study, the state’s net benefit would be slightly above the national average. California depends less on oil consumption than other states do: in 2012 it accounted for about 13 percent of the nation’s output but just 9 percent of its oil use. By itself, this would suggest that California should benefit less than other states. However, California is also less dependent on oil production than the rest of the country is, accounting for 6.5 percent of national oil output (again, compared to 13 percent of all types of output) in 2014. Although California is a net consumer of oil, some areas of the state, such as Kern County, are net producers, so cheaper oil hurts these local economies.

Gasoline Prices Affect Transportation Funding. As oil prices have dropped, so have California’s gasoline prices. Last week, the average retail price of gasoline in California was $2.72 per gallon—down a dollar since the first week of October. When prices drop, consumers buy more gasoline.

California's transportation funding relies heavily upon gasoline excise taxes. The state’s gasoline excise tax has two parts, and low gasoline prices affect each part differently. The first one—an 18-cent “base” excise tax—depends only on the amount of gasoline sold. Low prices lead to higher gasoline consumption, which leads to higher revenue from the base excise tax.

The second excise tax on gasoline—resulting from California’s fuel tax swap—has a rate that varies from year to year. In the short run, revenue from this tax depends only on the amount of gasoline sold, so low gasoline prices lead to higher revenue. However, the year-to-year rate changes are based on a formula that incorporates past gasoline prices. That means that low gasoline prices this year will lead to a lower excise tax rate—and therefore lower revenue—in future years.