The U.S. Bureau of Economic Analysis (BEA) released estimates of state personal income through the second quarter of 2015 on September 30. Personal income is an economic statistic: a broad measure of economic activity in California. It measures wages and salaries and various other types of income, but it excludes capital gains (income resulting from sales of assets, such as stocks and homes). 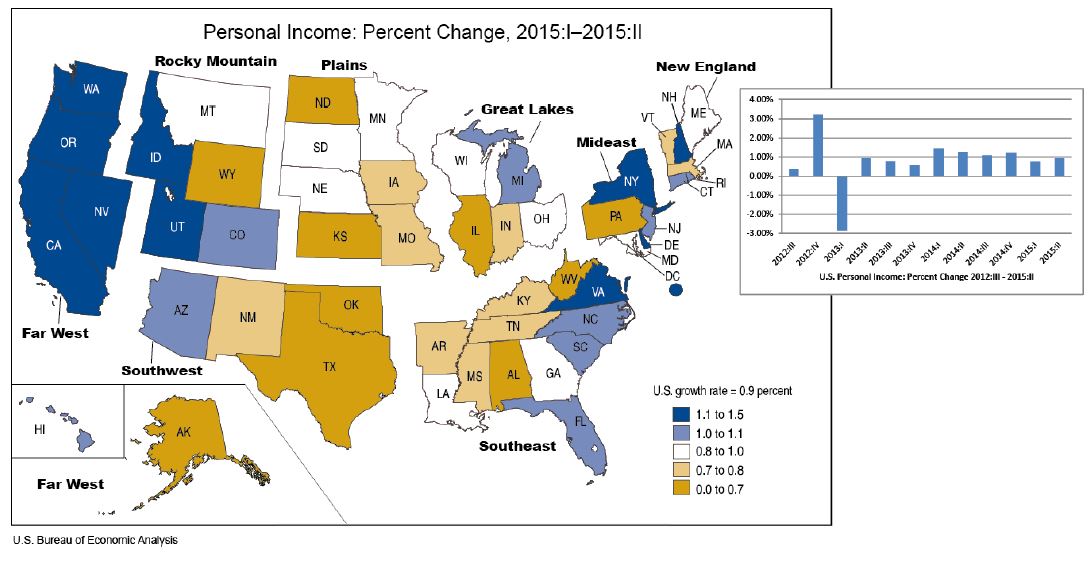 Technology and Other Services Fueled 2015Q2 Growth. BEA breaks down the growth of "earnings by place of work," a major component of personal income, on an industry-by-industry basis each quarter (see Tables 4 and 5 in the BEA release). For 2015Q2, California earnings by this measure are up by $11.4 billion, compared to 2015Q1. Of that $11.4 billion, $3.3 billion came from the technology-heavy professional and technical services sector, which is focused in the Bay Area. This $3.3 billion of growth represented a 1.8% growth rate for the quarter in this California sector. State and local government earnings were up by $1.5 billion, followed by health care and social services (up $1.2 billion). Earnings in the information sector, which includes the movie industry, telecommunications, and some internet businesses, fell by about $1 billion in the 2015Q2 data. In percentage terms for 2015Q2, fast-growing earnings sectors in California included the management sector (up 2.8%) and federal government civilian employment (up 2.1%). Farm earnings in California grew by 2.0% in 2015Q2. The weakest earnings sectors in California were utilities (down 3.8%) and mining (generally oil, down 3.2%), the latter mirroring a national trend connected with lower oil prices.