A YES vote on this measure means: The Legislature will be required under the State Constitution to continue to spend revenues from recently enacted fuel taxes and vehicle fees on transportation purposes (such as repairing roads and improving transit).

A NO vote on this measure means: The Legislature in the future could change current law, allowing it to spend a portion of the revenues from recently enacted fuel taxes and vehicle fees on purposes other than transportation.

Fiscal Impact: No direct effect on the amount of state and local revenues or costs but could affect how some monies are spent.

Taxes and Fees. Senate Bill 1 increased gasoline and diesel excise taxes, which are set on a per-gallon basis. It also increased diesel sales taxes, which are set based on price. For zero-emission vehicles (such as electric cars) model year 2020 and later, it increased vehicle registration fees by a fixed dollar amount. Additionally, SB 1 created a new transportation improvement fee, which vehicle owners pay based on the value of their vehicle. Most of the taxes and fees already are in effect, with all taking effect by 2020.

Restrictions on Revenues. Senate Bill 1 will raise $5 billion annually when all its taxes and fees are in effect. Figure 1 shows the annual revenues raised from each tax and fee, as well as whether existing provisions of the State Constitution restrict them for transportation purposes. Though the Legislature chose to dedicate all the SB 1 revenues to transportation, the State Constitution does not require this for the revenues from the transportation improvement fees and diesel sales taxes. As such, the Legislature could choose in the future to use these two revenue sources for purposes other than transportation. 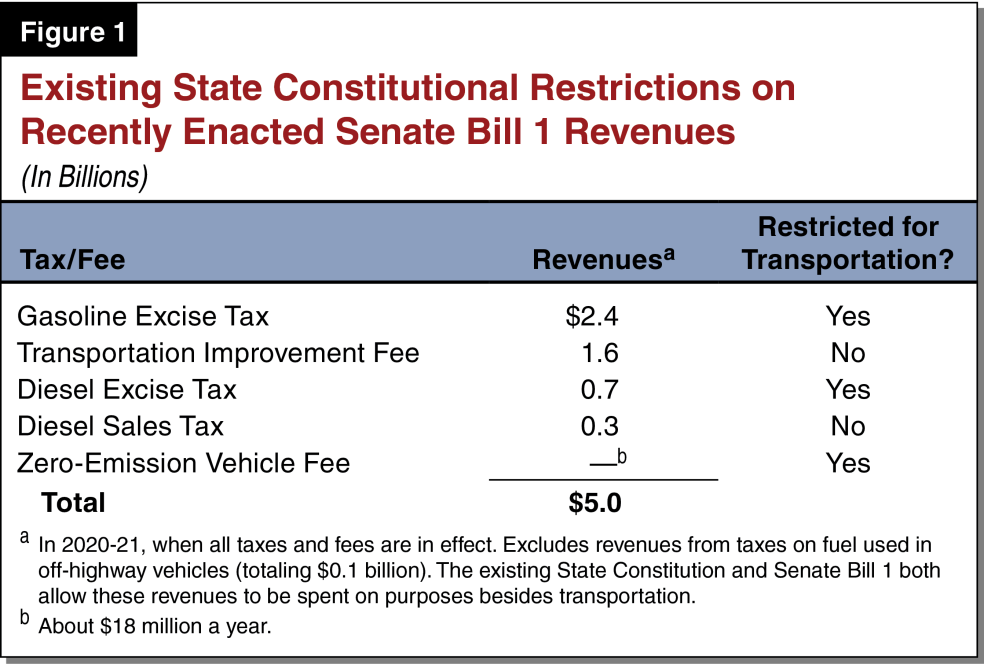 The State Constitution requires the state and local governments to keep their annual spending at or below a certain level, based on a formula established by a voter proposition passed in 1979. The State Constitution exempts some spending from counting toward these limits, including spending from most gasoline and diesel excise tax revenues and spending on capital projects. Due to these exemptions, only a small portion (less than one-tenth) of spending from the new SB 1 revenues count toward the state limit. It is currently estimated that the state is several billion dollars below its limit.

Exempts Revenues From Spending Limits. Proposition 69 exempts spending from all the revenues raised from SB 1 from counting toward state and local spending limits.

No Direct Fiscal Effect but Could Affect How Some Monies Are Spent. Proposition 69 would not directly affect the amount of state and local revenues or costs. (This is because it does not change the tax and fee rates established in SB 1.) The proposition could affect how some monies are spent in the future by requiring the Legislature to continue to spend revenues from diesel sales taxes and transportation improvement fees on transportation purposes, rather than other purposes. Additionally, the proposition puts the state a little further below its constitutional spending limit.