Propositions on the November 8, 2016 Ballot

A YES vote on this measure means: State agencies would generally be prohibited from paying more for any prescription drug than the lowest price paid by the U.S. Department of Veterans Affairs for the same drug.

A NO vote on this measure means: State agencies would continue to be able to negotiate the prices of, and pay for, prescription drugs without reference to the prices paid by the U.S. Department of Veterans Affairs.

Potential for state savings of an unknown amount depending on (1) how the measure’s implementation challenges are addressed and (2) the responses of drug manufacturers regarding the provision and pricing of their drugs.

Fiscal Impact: Potential for state savings of an unknown amount depending on (1) how the measure’s implementation challenges are addressed and (2) the responses of drug manufacturers regarding the provision and pricing of their drugs.

The State Payments for Prescription Drugs

Annual State Drug Expenditures Totaled Almost $3.8 Billion in 2014-15. As shown in Figure 1, the state spent almost $3.8 billion on prescription drugs in 2014-15 under a variety of state programs. State funds pay for roughly half of overall state prescription drug spending, and the remainder is paid with federal and other nonstate revenues. 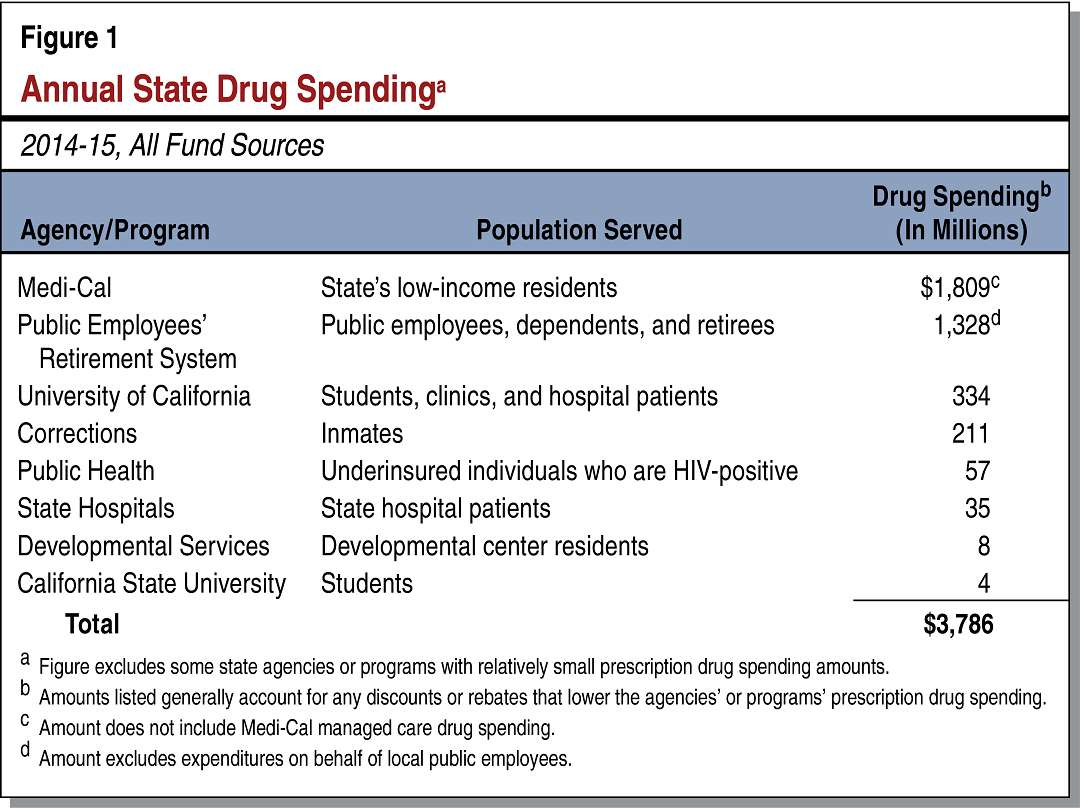 Prices Actually Paid Often Differ From the Drugs’ “List Prices.” Prescription drugs sold in the United States have list prices that are similar to the manufacturer’s suggested retail price (MSRP) for automobiles. Purchasers of the drugs typically negotiate the prices and often receive discounts. As a result, the final price paid for a prescription drug is typically lower than its list price.

Different Payers Often Pay Different Prices for the Same Prescription Drug. Often there is no single price paid by all payers for a particular prescription drug. Instead, different payers may regularly pay different prices for the same drug, which reflect the results of negotiations between the drugs’ buyers and sellers. For example, two different insurance companies may pay different prices for the same drug, as may two separate state agencies such as the California Department of Health Care Services (DHCS) and the California Department of Public Health.

State Strategies to Reduce Prescription Drug Prices. California state agencies pursue a variety of strategies to reduce the prices they pay for prescription drugs, which typically involve negotiating with drug manufacturers and wholesalers. The particular strategies vary depending on program structure and the manner in which the state programs pay for drugs. For example, multiple California state departments jointly negotiate drug prices with manufacturers. By negotiating as a single, larger entity, the participating state departments are able to obtain lower drug prices. Another state strategy is to negotiate discounts from drug manufacturers in exchange for reducing the overall administrative burden on doctors prescribing these manufacturers’ drugs.

Programs to Reduce Federal Prescription Drug Expenditures. The federal government has established discount programs that place upper limits on the prices paid for prescription drugs by selected federal payers, including the VA. These programs generally result in lower prices than those available to private payers.

VA Publishes Some of Its Prescription Drug Pricing Information. The VA maintains a public database that lists the prices paid by the VA for most of the prescription drugs it purchases. According to the VA, however, the database may not display the lowest prices paid for some of the drugs for which the VA obtains additional negotiated discounts. The VA may not publish this pricing information in the database due to confidentiality clauses that are included in certain drugs’ purchase agreements and are intended to prohibit public disclosure of the negotiated prices.

Measure Sets an Upper Limit on Amount State Can Pay for Prescription Drugs. This measure generally prohibits state agencies from paying more for a prescription drug than the lowest price paid by the VA for the same drug after all discounts are factored in for both California state agencies and the VA.

Measure Exempts a Portion of the State’s Largest Health Care Program From Its Drug Pricing Requirements. The state’s Medi-Cal program offers comprehensive health coverage to the state’s low-income residents. The state operates Medi-Cal under two distinct service delivery systems: the fee-for-service system (which serves approximately 25 percent of Medi-Cal enrollees) and the managed care system (which serves approximately 75 percent of enrollees). While the measure applies to the fee-for-service system, it exempts the managed care system from its drug pricing requirements described above.

By prohibiting the state from paying more for a prescription drug than the lowest price paid by the VA, there is the potential for the state to realize reductions in its drug costs. There are, however, major uncertainties concerning (1) the implementation of the measure’s lowest-cost requirement and (2) how drug manufacturers would respond in the market. We discuss these concerns below.

Some VA Drug Pricing Information May Not Be Publicly Accessible. The measure generally requires that the prescription drug prices paid by the state not exceed the lowest prices paid by the VA on a drug-by-drug basis. As mentioned above, the VA’s public database information on the prices of the prescription drugs it purchases does not always identify the lowest prices the VA pays. This is because, at least for some drugs, the VA has negotiated a lower price than that shown in the public database and is keeping that pricing information confidential. It is uncertain whether the VA could be nonetheless required to disclose these lower prices to an entity—such as DHCS—requesting such information under a federal Freedom of Information Act (FOIA) request. A FOIA exemption covering trade secrets and financial information may apply to prevent the VA from having to disclose these currently confidential prices to the state.

Confidentiality of VA Drug Prices Could Compromise the State’s Ability to Implement the Measure. If the VA is legally allowed to keep some of its prescription drug pricing information confidential, DHCS would be unable to assess in all cases whether state agencies are paying less than or equal to the lowest price paid by the VA for the same drug. This would limit the state’s ability to implement the measure as it is written. However, to address challenges in implementing laws, courts sometimes grant state agencies latitude to implement laws to the degree that is practicable as long as implementation is consistent with the laws’ intent. For example, courts might allow the state to pay for drugs at a price not exceeding the lowest known price paid by the VA, rather than the actual lowest price, to allow the measure to be implemented.

Potential Confidentiality of Lowest VA Drug Prices Reduces but Does Not Eliminate Potential State Savings. The potential confidentiality of at least some of the lowest VA prices reduces but does not eliminate the measure’s potential to generate savings related to state prescription drug spending. Though pricing information may be unavailable for some of the VA’s lowest-priced prescription drugs, publicly available VA drug prices have historically been lower than the prices paid by some California state agencies for some drugs. To the extent that the VA’s publicly available drug prices for particular drugs are lower than those paid by California state agencies and manufacturers choose to offer these prices to the state, the measure would help the state achieve prescription drug-related savings.

Below are two possible manufacturer responses. (We note that manufacturers might ultimately pursue both strategies, while at the same time offering some drugs at favorable VA prices.)

As discussed above, if adopted, the measure could generate annual state savings. However, the amount of any savings is highly uncertain as it would depend on (1) how the measure’s implementation challenges are addressed and (2) the uncertain market responses of drug manufacturers to the measure. As a result, the fiscal impact of this measure on the state is unknown. It could range from relatively little effect to significant annual savings. For example, if the measure lowered total state prescription drug spending by even a few percent, it would result in state savings in the high tens of millions of dollars annually.