Pursuant to Elections Code Section 9005, we have reviewed a proposed constitutional initiative concerning taxes (A.G. File No. 15-0115, Amendment No. 1). The proposal extends temporary personal income tax (income tax) rate increases on high-income taxpayers that were approved as part of Proposition 30 in 2012.

Medi-Cal Program. In California, the federal Medicaid program is known as Medi-Cal. The Medi-Cal program uses state and federal funds to provide health care services to most low-income persons. Medi-Cal is the largest state-administered health program in terms of spending and people served. In the current fiscal year, the state will spend around $18 billion from the General Fund on Medi-Cal.

Proposition 2. In November 2014, California voters approved Proposition 2. Proposition 2 creates a new set of rules to determine the amount of money the state has to deposit to a rainy day fund (the Budget Stabilization Account), particularly when the economy and stock market are doing well. This fund is intended to reduce the need for budget cuts, tax increases, and other measures in the future when the economy or stock market weakens. Proposition 2 requires that money be deposited into the rainy day fund until the total reaches a maximum of 10 percent of General Fund tax revenues—which now equals about $12 billion. Proposition 2 also requires the state to pay down certain state debts faster.

State Spending Limit. In addition to Propositions 2, 30, and 98, the State Constitution includes other rules affecting the state budget, such as the state spending limit that has been in place since passage of Proposition 4 in 1979.

Department of Finance (DOF). Led by the Director of Finance, DOF is the executive branch entity that supervises the state government’s financial policies.

Provides Some New Monies for Medi-Cal. For fiscal years 2018-19 through 2030-31, the measure requires DOF to determine how much revenue raised by this measure would be available for the Medi-Cal program. Specifically, DOF would (1) estimate the amount of revenues raised by this measure and (2) subtract from that estimate higher required school and community college spending and certain other government costs, such as the cost of more people being served by state government programs. The lesser of (1) 50 percent of the resulting amount or (2) $2 billion would be allocated to the Medi-Cal program. During a Proposition 2 budget emergency, the measure allows this allocation to be reduced in proportion to the reduction in overall General Fund spending. 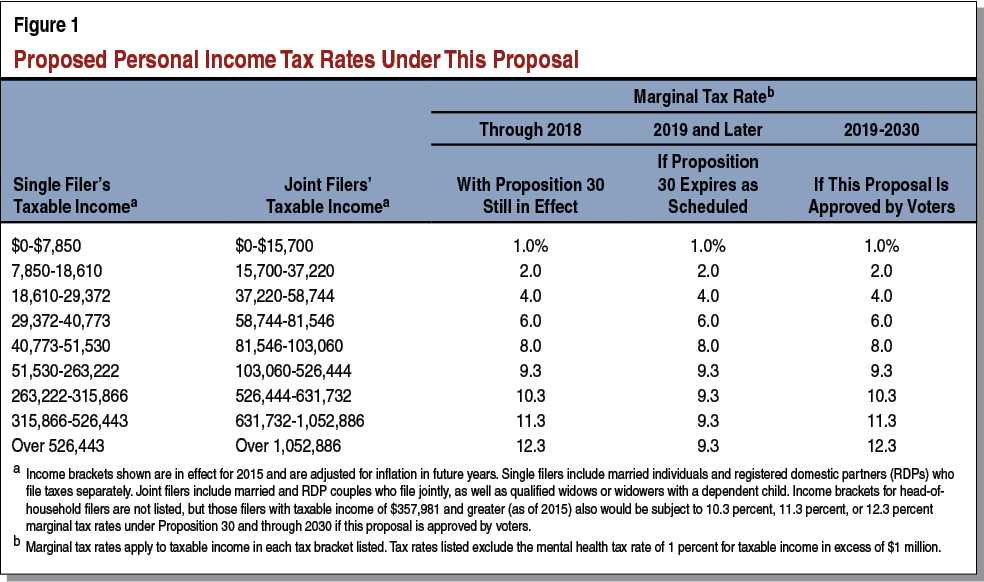 Increased School and Community College Funding. Under current law, the expiration of Proposition 30 is expected to slow the growth of state tax revenues, thereby slowing the growth of the Proposition 98 minimum funding level. Under this measure, the amount of Proposition 98 funds provided to schools and community colleges each year probably would increase by a few billion dollars, compared to what these entities would receive if all of Proposition 30’s tax increases expired. The amount of increased school spending over the 2019-2030 period could vary significantly, depending on such factors as the Proposition 98 variables and the state of the economy during the period.

Increased Medi-Cal Funding. The amount of increased Medi-Cal spending could vary significantly each year, ranging from $0 to $2 billion. The measure delegates to DOF the authority to make this estimate by implementing this measure’s provisions.

Remaining Funding Generally Available for Any Purpose. After satisfying requirements that the state tax revenues raised by this measure be allocated for (1) school and community college funding, (2) budget reserves and debt payments, and (3) the Medi-Cal program, the state could use any remaining funds for any budget purpose. The use of that funding would depend on decisions by future legislatures and governors.

Other Fiscal Effects. The likelihood that the state exceeds its Proposition 4 spending limit in the future is difficult to predict. If, however, this were to occur between 2019 and 2030, part of this measure’s revenues would go to one-time taxpayer rebates and one-time school and community college spending instead of being available for other state purposes.

Fiscal Summary. This measure would have the following major fiscal effects: